2.When the player gets the blocks piles up to the eleventh floor, he wins minor prize. Both the other two square red buttons flash. The blue button on the left is CONTINUE TO PLAY button and player can press it to continue the game to strive for major prize. On the other hand, the red button on the right is SELECT PRIZE button, if player press it, the annular prize lamp will light in turn. He presses the round button in the middle to make the decision that which prize he wants. Then the machine pays out the prize according to the input signal for him.

3.If the player hasn’t get the blocks pile up to the eleventh floor or he hasn’t win major prize after he decides to strive for the major prize when he wins minor prize, blocks hang in the air and drops. Then he fails the game.

4.When player gets the blocks pile up to the highest floor, he win major prize. He can get his prize in the same way as the described way in “2”. 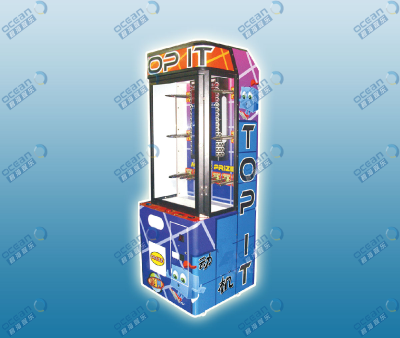